A biology investigation usually starts with an observation—that is, something that catches the biologist’s attention. For instance, a cancer biologist might notice that a certain kind of cancer can’t be treated with chemotherapy and wonder why this is the case. A marine ecologist, seeing that the coral reefs of her field sites are bleaching—turning white—might set out to understand why.

How do biologists follow up on these observations? How can you follow up on your own observations of the natural world? In this article, we’ll walk through the scientific method, a logical problem-solving approach used by biologists and many other scientists.

The scientific method is used in all sciences—including chemistry, physics, geology, and psychology. The scientists in these fields ask different questions and perform different tests. However, they use the same core approach to find answers that are logical and supported by evidence.

Let’s build some intuition for the scientific method by applying its steps to a practical problem from everyday life.

Let’s suppose that you get two slices of bread, put them into the toaster, and press the button. However, your bread does not toast.

Why didn’t my bread get toasted?

A hypothesis is a potential answer to the question, one that can somehow be tested and falsified. For example, our hypothesis in this case could be that the toast didn’t toast because the electrical outlet is broken.

This hypothesis is not necessarily the right explanation. Instead, it’s a possible explanation that we can test to see if it is likely correct, or if we need to make a new hypothesis.

A prediction is an outcome we’d expect to see if the hypothesis is correct. In this case, we might predict that if the electrical outlet is broken, then plugging the toaster into a different outlet should fix the problem. Predictions are frequently in the form of an If-then statement.

To test the hypothesis, we need to make an observation or perform an experiment associated with the prediction. For instance, in this case, we would plug the toaster into a different outlet and see if it toasts.

The results of a test may either support or refute—oppose or contradict—a hypothesis. Results that support a hypothesis can’t conclusively prove that it’s correct, but they do mean it’s likely to be correct. On the other hand, if results contradict a hypothesis, that hypothesis is probably not correct. Unless there was a flaw in the test—a possibility we should always consider—a contradictory result means that we can discard the hypothesis and look for a new one.

The last step of the scientific method is to reflect on our results and use them to guide our next steps. 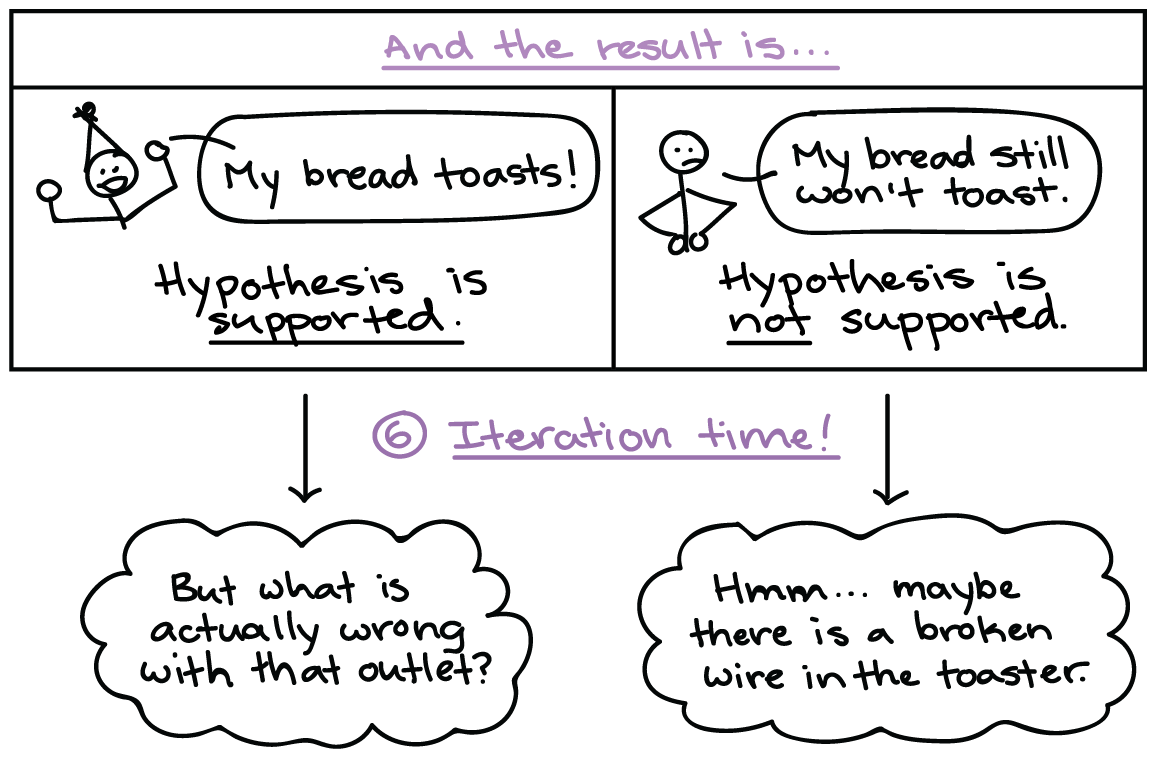 In most cases, the scientific method is an iterative process. In other words, it’s a cycle rather than a straight line. The result of one go-round becomes feedback that improves the next round of question asking.

How is the scientific method used by biologists?

A hypothesis isn’t necessarily right. Instead, it’s a “best guess,” and the scientist must test it to see if it’s actually correct. Scientists test hypotheses by making predictions: if hypothesis X is right, then Y should be true. Then, they do experiments or make observations to see if the predictions are correct. If they are, the hypothesis is supported. If they aren’t, it may be time for a new hypothesis.

What are the key ingredients of a controlled experiment? To illustrate, let’s consider a simple (even silly) example.

Suppose I decide to grow bean sprouts in my kitchen, near the window. I put bean seeds in a pot with soil, set them on the windowsill, and wait for them to sprout. However, after several weeks, I have no sprouts. Why not? Well…it turns out I forgot to water the seeds. So, I hypothesize that they didn’t sprout due to lack of water.

To test my hypothesis, I do a controlled experiment. In this experiment, I set up two identical pots. Both contain ten bean seeds planted in the same type of soil, and both are placed in the same window. In fact, there is only one thing that I do differently to the two pots:

Let’s see how this simple example illustrates the parts of a controlled experiment.

Write your own caption to explain the controlled experiment in these three panels.

Experimental data (singular: datum) are observations made during the experiment. In this case, the data we collected were the number of bean sprouts in each pot after a week.

Out of the ten watered bean seeds, only nine came up. What happened to the tenth seed? That seed may have been dead, unhealthy, or just slow to sprout. Especially in biology (which studies complex, living things), there is often variation in the material used for an experiment – here, the bean seeds – that the experimenter cannot see.

Because of this potential for variation, biology experiments need to have a large sample size and, ideally, be repeated several times. Sample size refers to the number of individual items tested in an experiment – in this case, 10 bean seeds per group. Having more samples and repeating the experiment more times makes it less likely that we will reach a wrong conclusion because of random variation.

In fact, the beans in pots experimental design here has a major flaw. All the beans for each treatment are planted in the same pot. What if there’s an effect of the pot itself, its soil, or its location, that causes the beans in one to germinate better. A better design would be to plant each seed in it’s own pot, so that each seed is completely independent of the next seed. That independence for each sample is required to correctly use the statistical tests that biologists and other scientists also use to help them distinguish real differences from differences due to random variation (e.g., when comparing experimental and control groups).

Consider this example: A farmer wants to maximize her tomato crop yield and wonders if re-potting her plants in soil with various concentrations of nitrogen:phosphorus ratios will affect growth of tomato plants. After consulting the literature, she hypothesized that fertilizers high in nitrogen will produce fewer tomatoes, and fertilizers high in phosphorus will produce many tomatoes. Use this information to: