The information below was adapted from OpenStax Biology43.2

The reproductive structures of many animals are very similar, even across different lineages, in a process that begins with two gametes–eggs and sperm–and ends with a zygote, which is a fertilized egg. In animals ranging from insects to humans, males produce sperm in testes and sperm are stored in the epididymis until ejaculation. Sperm are small, mobile, low-cost cells that occur in high numbers. Females produce an ovum or egg that matures in the ovary. Eggs are large cells that require a substantial investment of time and energy to form, are non-mobile, and are rare relative to sperm numbers. When the eggs are released from the ovary, they travel to the uterine tubes for fertilization (in animals that reproduce via internal fertilization) or are released in the aqueous environment (in animals that reproduce via external fertilization).

The first half of Hank Green’s Crash course video below has a nice summary of these ideas for a diversity of eukaryotes, while the second half of the video introduces the human reproductive anatomy before we take a deeper dive into the structures and functions via dynamic hormonal changes.

For our purposes, all sexual reproducers have females with ovaries that produce large eggs, which subsequently travel down a uterine tube, and males with testes that produce small, plenteous sperm, stored in an epididymus. Of course, beyond this general anatomy, there are some differences in different types of animals:

The remainder of today’s content focus on human reproduction and include structures as well as hormonal control. We will provide a list of the anatomy you need to know and would like you to focus on the hormones and how they work together to support effective reproduction. Hormones are dynamic (changing), so this process can be trickier to understand. Hormonal changes are the center of the fascinating biology of reproduction. 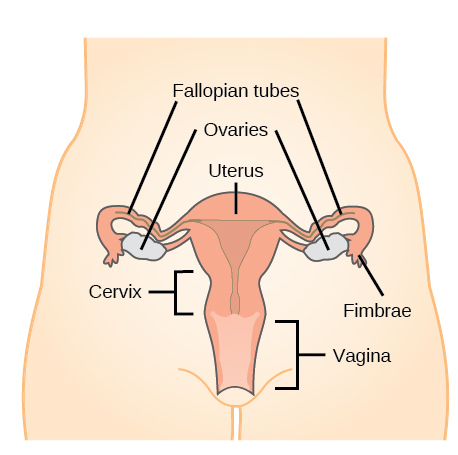 During puberty, the hypothalamus in the brain signals the pituitary gland to produce two hormones, follicle-stimulating hormone (FSH) and luteinizing hormone (LH). In females, FSH and LH stimulate the ovaries to produce the female sex hormones, estrogen and progesterone. This results in the development of secondary sex characteristics (such as breasts) and causes the ovaries to begin producing mature eggs.

The control of reproduction in females is complex, and we’ll focus on the basics here. Egg production is controlled by FSH, LH, estrogen, and progesterone.

These hormones together regulate the ovarian and menstrual cycles. The ovarian cycle controls the production and release of eggs, while the menstrual cycle governs the preparation and maintenance of the uterine lining. These cycles occur concurrently and are coordinated over a 22–32 day cycle, with an average length of 28 days:

The figure below visually compares the ovarian and uterine cycles as well as the hormone levels controlling these cycles. Diagram of male reproductive organs
Image from OpenStax, CC BY 4.0

In response to signals from the hypothalamus that begin at the onset of puberty in males, the pituitary gland produces FSH. FSH enters the testes to begin facilitating spermatogenesis, which is the production of sperm cells (gametes) by meiosis. LH, made by the pituitary, also enters the testes to stimulate the production and release of testosterone into the blood. Testosterone stimulates spermatogenesis as well as the development of male secondary sex characteristics that include a deepening of the voice, the growth of facial, axillary, and pubic hair, and the beginnings of the sex drive. When sperm counts get too high (over about 20 million/ml), rising testosterone levels act on the hypothalamus and pituitary gland to inhibit the release of FSH and LH. The inhibition  causes spermatogenesis to slow down until proper levels are again achieved. This video provides a concise overview of the anatomy and function of the male reproductive system:

How and when are gametes made?

As you’ve just seen in the two videos the production of sperm and eggs takes place through the process of meiosis, which we learned about in an earlier reading. There are some big differences between the processes to make eggs versus sperm:

The information below was adapted from OpenStax Biology 43.5

Methods of contraception to prevent pregnancy have varying probabilities of success. In the diagram below, the failure rate is the given as the percent of women who become pregnant during the first year of use of that method. 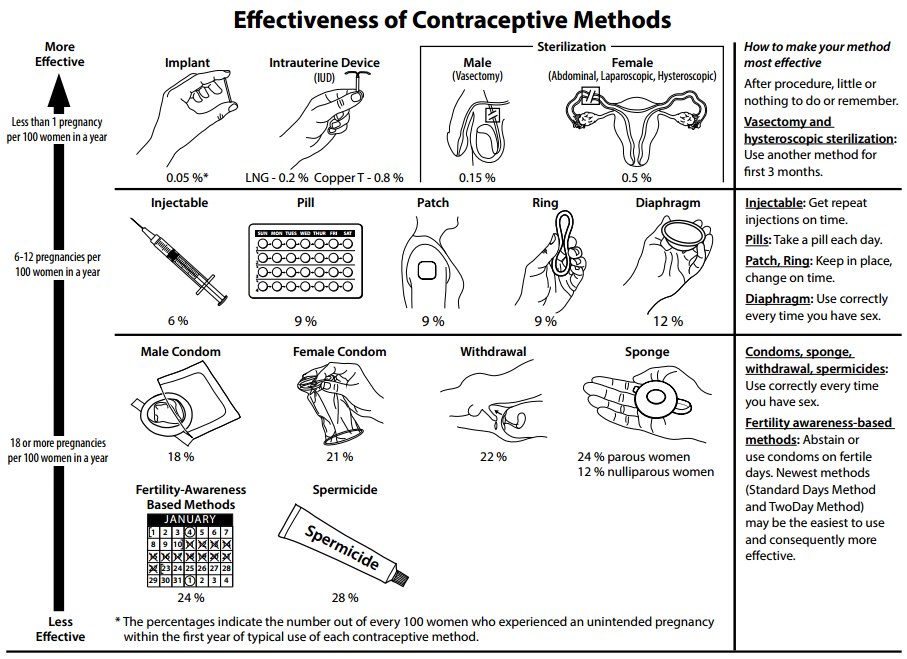 Work through the methods in this diagram to determine the most effective strategies for preventing pregnancy. Methods in combination, such as spermicidal chemicals and barrier, prevent pregnancy more effectively than do the methods when used separately.

What causes failure? Not all sperm are in the ejaculate, so without a barrier, a some sperm may still enter the vagina. Hormonal methods vary in success by hormone delivery method. A method not pictured is emergency contraception, also known as “Plan B.” This hormone-based method of contraception works against the egg and the sperm simultaneously, and before the fertilization occurs.

This video provides a quick overview of hormone-based birth control, with emphasis on emergency contraception: