However, asexually-reproducing individuals can only make clones, meaning that every one of their offspring are genetically identical (except in the case of mutations). This can be a disadvantage if conditions suddenly change, and the individuals are no longer well-adapted to the conditions. In contrast, sexual reproduction produces offspring with novel combinations of genes, which can be an advantage in unstable or unpredictable environments.

The information below was adapted from Wikipedia. Species that can switch between sexual and asexual reproduction, such as the water flea Daphnia pulex (see image), highlight the relative advantages of asexual and sexual reproduction.  Daphnia live in various aquatic environments, including ponds, lakes, streams, and rivers. Early in the growth season, when food is abundant, diploid Daphnia females reproduce asexually via parthenogenesis. Almost all Daphnia in these populations are female and genetically identical to their mothers (via parthenogenic reproduction). Toward the end of the growing season, when conditions are not as stable or ideal, the Daphnia females alter their reproductive strategies to produce male as well as female offspring, as illustrated in the graph below. Instead of reproducing parthenogenic, diploid daughters, they start producing haploid eggs which are then fertilized by the males. These special haploid eggs are capable of surviving extreme conditions such as cold or drought, and they will hatch into diploid individuals once environmental conditions improve.This video discusses some of the above as it address the question of “why sex?”:

Gametes (sperm and eggs) are haploid, and made by meiosis

Most eukaryotic cells are diploid (2N), indicating that they contain two full sets of chromosomes, one set from each of the organism’s parents. “Ploidy” is the number of full sets of chromosomes that a cell has, and “di” means two, so diploid = two copies.  When diploid organisms reproduce sexually, they produce new offspring by the fusion of two haploid gametes (sperm and eggs).  Haploid (1N) cells have a single copy of each chromosome. When the two haploid gametes fuse, they merge their genetic information, resulting in diploid offspring. If gametes were not haploid, then fusion of diploid gametes would result in tetraploid (4N) offspring, who would have twice as many chromosomes as they were supposed to have, and twice as many chromosomes as other members of their own species.

Meiosis sets the stage for how inheritance works (which is the topic of our next class). Here’s what happens during meiosis, which is divided into two cell divisions, numbered I and II:

The take-home is that meiosis results in the production of haploid cells. The cells are actually haploid after meiosis I, which seems pretty confusing, but it’s true!

Here are two simplified diagrams illustrating the overall process and products of meiosis (top) vs mitosis (bottom). Compare the final results of mitosis with the products of meiosis I, and you can see that things look pretty different even after the first meiotic division: 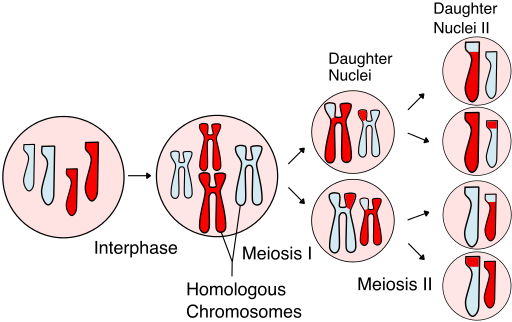 And this video provides an overview of meiosis:

The chromosome number, N, in eukaryotes, refers to the number of chromosomes in a haploid cell, or gamete (sperm or egg cell). Diploid cells (all the cells in our body except our gametes) have 2N chromosomes, because a diploid organism is created by union of 2 gametes each containing 1N chromosomes. In terms of chromosome number (ploidy), it’s useful to think of chromosomes as packages of genetic information. A pair of sister chromatids (the result of DNA replication during S phase) is actually just one chromosome because it has genetic information (alleles) inherited from only one parent. A pair of homologous chromosomes, each consisting of a single chromatid in a daughter cell at the end of mitosis, has alleles from the father and from the mother, and counts as 2 chromosomes.

The video below presents a helpful way for recognizing how many chromosomes are present in a cell (and thus the ploidy level of that cell):

Fertilization and meiosis alternate in sexual life cycles. What happens between these two events depends on the organism. The process of meiosis reduces the chromosome number by half. Fertilization, the joining of two haploid gametes, restores the diploid condition. Different organisms accomplish these steps in different ways and at different times in their life cycles (note that a change in ploidy is always required). All life cycles involve a haploid (1 complete set of chromosomes) and diploid (2 complete sets of chromosomes) stage, but they vary in how and when in the life cycle these stages occur. There are three main categories of life cycles in multicellular organisms:

Sex determination – How are sexes determined?

In simplified terms, the two systems above seem like chromosomal sex determinism, and some may truly be, with multiple genes on the sex chromosome that encode sex-specific traits. However, in humans, we now believe that one genetic region in particular encodes male traits: the sex-determining region Y (SRY), located on the Y chromosome, encodes a protein during development that differentiates its bearer into a male human.

Sex determinism can also be based on ploidy, in a phenomenon called haplodiploidy:

The sex of some species is not determined by genetics at all but by some aspect of the environment, called environmental sex determinism:

And in some species, biological gender isn’t as simple as male or female, or it may even change during the course of an individual’s life!